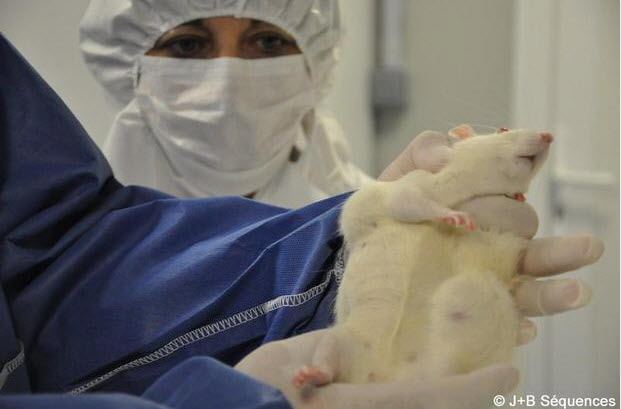 This past week I read the full text of a new groundbreaking study on GMO’s. It simultaneously sunk my heart and sparked me up.  For the first time since the early 1990’s when GMO’s were introduced into our food supply, we have definitive proof that GMO’s pose a serious and fatal health threat.   Eating GMO corn and the herbicide Roundup at levels currently considered “safe” can cause cancerous breast tumors and multiple organ damage (liver and kidney) and can also lead to premature death in laboratory animals.

The study, led by molecular biologist Gilles-Eric Seralini of the University of Caen in France, was published this month in the prestigious peer-reviewed journal Food and Chemical Toxicology.  After reading this article, you may also want to view this short video that was filmed during the study to help you get the full impact of the significance of its findings.· Click on the image above to view it. 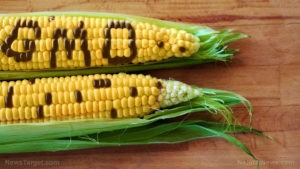 Monsanto’s GMO corn, called NK603, has been engineered to be resistant to Roundup.  This allows farmers to douse fields with massive amounts of Roundup without worrying about killing the corn.  No long-term studies have ever been conducted to determine whether it would kill animals or humans.  Many researchers have previously warned that the GMO corn, sprayed with Roundup or not, is unsafe to eat, and this new study shows they’ve been right all along.  In the groups exposed to the GMO’s and Roundup, both separately and combined, there was a 600 percent increase—or six times more deaths—compared to the control group!

The problem here for all of us is that GMO corn is used to make literally hundreds of foods and food additives.  It shows up in 70 percent of processed or packaged food in U.S. grocery stores.  Some of the common sources of GMO corn are: ascorbic acid, Aspartame, Nutrasweet, baking powder, citric acid, cornstarch, modified food starch, erythritol, xylitol, fructose (any form), maltodextrin, monosodium glutamate,  xanthan gum, and the endless number of corn products such as breakfast cereals, tortilla chips, corn tortillas, corn flour, corn masa, corn oil, high fructose corn syrup, and corn syrup, just to name a few.

The results of this study make it even more imperative to avoid GMO sources of corn by consuming only organic corn products.  By USDA law, organic crops cannot come from GMO seeds.  Eating a processed-free diet also makes it easier to avoid GMO’s. And just to let you know, all of the ingredients in Dee’s Naturals products are non-GMO, including the baking powder.  Most baking powders contain cornstarch, and since there are no GMO labeling laws in the United States, we have no way of knowing if the corn used to make the cornstarch was from GMO corn.  If you want a non-GMO baking powder to use in your home baking, Bob’s Red Mill is a trusted brand.

Now, back to the study.  There were several significant and unique aspects of this study that set it apart from all other research on GMO’s to date:

Here’s a summary of how the study was conducted (click here to read the study in its entirety): 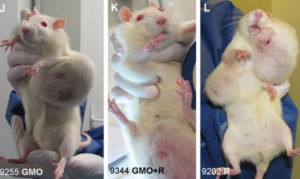 The type of GMO corn fed to the rats is known as NK603. This is a Roundup-tolerant variety of corn owned by Monsanto (according to the film, the researchers had to secretly purchase the GMO corn from a source in Canada, as Monanto does not allow the corn to be purchased without a contract, and they don’t allow it to be used for research by any organization other than themselves).

The control group was fed the nearest isogenic, non-GMO corn. (So basically they compared Monsanto’s GMO corn to a non-GMO corn that has similar DNA structure. (Monsanto claims their GMO corn is theoretically genetically identical to non-GMO corn and they claim they should not have to study long term effects of their GMO corn for this reason.)

It is important to remember that this was a two year experiment. Most lab rats live about two years, so this experiment followed these animals through what a normal life-span would be for them.

In the study article, there is a detailed summary table (Table 2) that you can take a look at. It gives you a quick comparison of the most frequent health effects caused by the GMO corn and GMO corn with Roundup and Roundup in water. The interesting thing that you notice right off is that indeed the GMO corn and GMOcorn/Roundup and Roundup water groups always have more health problems than the controls.

One other significant thing to note is that the groups with smaller amounts of GMO corn, GMO corn with Roundup and Roundup water caused as much damage as the groups who consumed or drank larger amounts. And even the group that had no GMO corn, and was only exposed to the Roundup in the water, developed tumors.  What sank my heart about this study was the realization that people, especially children, who are ingesting as much as 11% of their diet as GMO food could be causing themselves as much organ damage and growing as many tumors as those  eating 33% of their diet as GMO food. That’s horrifying!

I’ve written before about GMO’s, and I’ll keep writing about them until we finally see some legislation in this country.  It’s been disheartening to learn that in general, a 90-day animal study is all Monsanto has had to provide to win approval of any of their genetically modified crops.

I do want to point out that criticisms have quickly emerged, suggesting insufficient sample sizes, a breed of rats prone to tumor growth, and a lead researcher who was seemingly already convinced of the dangers of GMOs. One of the critics, Charles Benbrook of the Center for Sustaining Agriculture and Natural Resources at Washington State University, also pointed out “On the other hand, the study is actually more carefully designed and has the same sample size as the original study conducted on behalf of Monsanto and submitted to regulatory agencies in support of the approval of the tech in the first place. If industry thought that study had a good design, it’s a little disingenuous of them to be criticizing this study.

He is quoted in The Huffington Post as saying “I do think that this new study again raises an alarm bell, and ought to be followed up by much more careful studies with larger sample sizes, more than one species of lab animal and conducted by people that have no dogma on the side, haven’t done research in the area and don’t have an opinion in the area.”  Benbrook has also warned about the increased use of pesticides that has come with the explosive growth of GMO crops designed to be resistant to the chemicals.

It may sound exaggerated, but genetically modified foods are, from my perception, one of the most significant health threats of our time.  This study has proven that.  We are living in a food experiment and we are all the laboratory rats.  Please do all you can to avoid GMO’s.

If you want to learn more about GMO’s and how to avoid them, you can read my previous article, The Most Important Food Fight of Our Time, and my  three-part article on GMOs Just Say No to GMO’s part 1, part 2, and part 3.