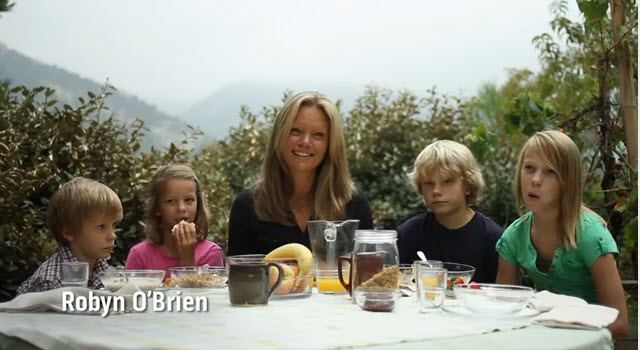 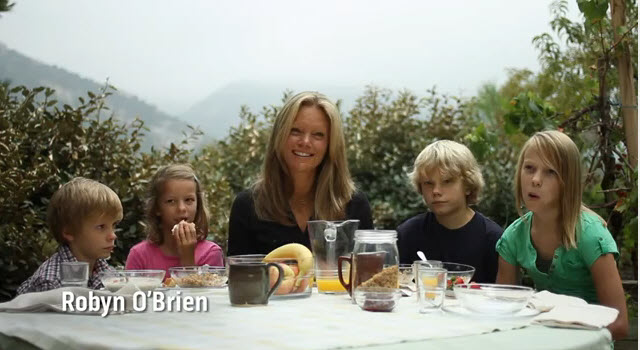 GMO Labeling – Your Right to Know 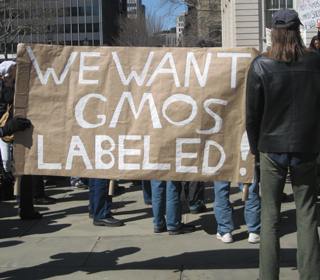 According to official surveys, more than 90 percent of Americans support mandatory labeling of foods containing GMOs.  Food activists have been fighting for twenty years to get U.S food companies to do this.  Why?  Because we have a basic right to know what’s in our food.  But the more important reason is that GMOs are scary.  They have changed the very essence of real whole natural foods, and have turned them into substances that are foreign to our bodies.  What’s even more scary is that they have never been tested for human safety.

If you’ve ever wondered why so many people suffer from food sensitivities and allergies, it’s because our food supply has undergone a recent radical change.  In the mid-1990’s, new food proteins were engineered and introduced into our food supply, unannounced and untested on humans and animals. In an effort to increase production and profits for food manufacturers, scientists articifially insert bacteria, viruses and other genes into the  DNA of soy, corn, canola, and many other foods. A genetically engineered growth hormone, rBGH (recombinant bovine growth hormone) is used on dairy cows.

These unlabeled genetically modified foods carry a high risk of triggering life-threatening allergic  reactions, and evidence collected over the past decade now suggests that they are contributing to higher allergy rates. Milk is the number one food allergen in the U.S.  Soy and corn allergies rank right behind it.  GMOs have been linked to the alarming increases in allergies, A.D.H.D, cancer, asthma and obesity.

An allergic reaction to food occurs when your body reacts to a food protein as a foreign invader (just like a virus or bacteria), which triggers an inflammatory response.  GMOs contain foreign proteins that have never been in our foods prior to the mid 1990’s.  That explains why adults who never had food allergies when they were younger, now have them.  And it explains why one out of seventeen children now have some form of food allergy.

In 1991, there was overwhelming consensus among scientists at the FDA that GMO foods were substantially different and could create unpredictable, unsafe, and hard-to-detect allergens, toxins, diseases, and nutritional problems. The scientists urged the agency to require long-term safety studies, including human studies, to protect the public.

But in spite of the protests, the warnings were not heeded by the FDA, which was under orders by the White House to promote biotechnology. As a result, GMOs—such as soybeans, corn, cottonseed, and rapeseeds (canola) that have had bacterial genes forced into their DNA—entered our foods without any required safety evaluations. 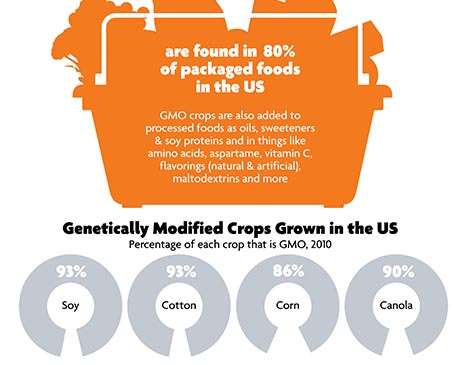 As crazy as it sounds, there have never been any human clinical trials on the effects of GMOs on our health, and not many long-term animal-feeding studies either, so we are largely in the dark about their effect on living creatures.

Has your doctor ever told you to avoid GMO foods??  Probably not.

Because GMOs have never been tested to determine their safety, and because so many health issues have arisen since their introduction, more than 40 of the world’s wealthiest countries, including Japan, China, and a host of European countries already label genetically engineered foods. GMOs are deeply unpopular in Europe, which has banned many genetically engineered crops and has strict labeling rules for those that are used.  India’s government is the most recent to come on board: beginning in January 2013, food products containing genetically modified ingredients will be required to carry a “GM” tag.  The United States and Canada are the only two developed countries in the world that do not require labeling of GMO foods. 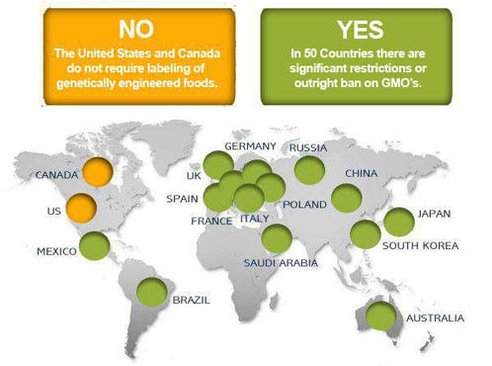 Processed foods in general can contribute to allergies for a number of different reasons. Most processed foods contain a variety of food colorings, flavors, preservatives, and other additives can have powerful and unforeseen chemical reactions in our body. But those chemicals are clearly listed on ingredient labels, and if you’re tying to avoid them, all you have to do is become a devoted ingredient list reader. GMOs are a more insidious hea

e are no labeling requirements in this country.

Good News: Organic is Not GMO and some Companies Voluntarily Label their Products

The USDA National Organic Program strictly prohibits the use of GMOs in any food carrying the USDA Organic Seal.  So if your food carries the organic seal, you know it’s not made with GMOs.  Organic growers and many other food companies have begun to take matters into their own hands, and are voluntarily labeling their products with a Non-GMO Project seal verifying that their foods do not contain genetically modified ingredients.  But all food companies should be required to let us know about GMO ingredients. 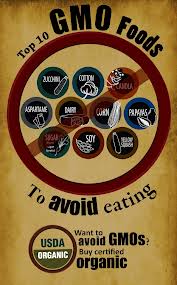 Where do GMO’s show up?

Everywhere! It is estimated that genetically modified ingredients are found in 80 percent of the U.S. food supply.  They’re in non-organic foods that contain the following:

Sugar: if the product is made in North America and lists “sugar” as an ingredient (and NOT pure cane sugar), then it is almost certainly a combination of sugar from both sugar cane and GMO sugar beets.

A Fight Worth Fighting

Real-food activists have been fighting for two decades to force U.S. Food companies to tell consumers when their products are made with genetically modified organisms.

But the company that has the patents on the GMO seeds (Monsanto), and the food manufacturers that use GMO ingredients are fighting back hard.  Very hard.  Foodmakers, like carmakers, know that what starts in California has a fair chance of becoming the national law, or at least the national norm.

This has become a very big food fight.  It’s a people’s movement against big corporations, and it’s one of the most important food fights of our time.

There’s something else that upsetting to me, and may be to you also.  Some of the natural food companies that you have come to know and love, are actually owned by big processed food companies.  One of my favorites, Larabar, is one of them. A few years back, Larabar was acquired by General Mills. Now General Mills is giving big bucks to fight against what Larabar-type people stand for. Some of my other favorites—Muir Glen, Cascadian Farms, and Santa Cruz Organic have also been bought out by the opposition in recent years.

This has left me in a quandary.  I stand against GMOs and I support GMO labeling. These companies that I have recommended and supported in the past are now on the side of food manufacturers who want to continue to keep consumers in the dark.

I am sure that the people at Larabar and Muir Glen would certainly want GMO’s labeled, but when they assimilated into a larger company that didn’t share their ideals, the possibility for this quandary arose.  They made their decision, and now I can’t support them.  I won’t be buying their products anymore.  It’s a difficult decision to make, but I have the right to know if GMO’s are in my food, and I can’t support any company that is fighting against that basic right.

We Can’t Wait For Legislation, We Have to Act Now

Whether you have food sensitivities or not, avoiding processed and GMO foods should be a priority.  We can’t wait for legislation.  We must begin to act in our own self interest.  You can begin by signing our petition asking the FDA to ban the most egregious food additives—many of which are made from GMO ingredients.

Also, an organization called JustLabelIt.org has already gathered over one million signatures on their petition asking the FDA to label GMO foods.  Theirs is a separate effort from the California proposition, and one of the ways you can act if you’re not a Californian.  To make your voice heard, click here.

If you don’t already have a copy of the Non-GMO Shopping Guide, please print one out and refer to it often. It can help you identify and avoid foods with GMOs. Also remember to look for products (including organic products) that feature the Non-GMO Project Verified Seal to be sure that at-risk ingredients have been tested for GMO content. You can also download the free iPhone application that is available in the iTunes store. You can find it by searching for ShopNoGMO in the applications.

When possible, buy your fresh produce and meat from local farmers who have committed to using non-GMO seeds and avoid processed non-organic foods as much as possible, as again these are virtually 100-percent guaranteed to contain GMO ingredients.

It may sound exaggerated, but genetically modified foods are, from my perception, one of the most significant health threats of our time.  We are living in a food experiment and we are all the guinea pigs.  The experiment is not going well, and is threatening the very sustainability of the human race. Everything you can do to avoid GMOs is a step toward saving humankind.

If you want to learn more about GMO’s, you can read my three-part article on GMOs (Just Say No to GMO’s part 1, part 2, and part 3).