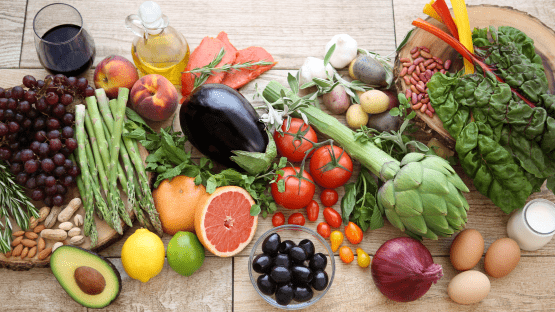 For the third year in a row, the Mediterranean diet was ranked number one on the U.S. News and World Report’s Best Diets Overall for 2020.

More than 30 diets were evaluated and ranked with input from a panel of health experts including doctors, nutritionists, dieticians, and specialists in diabetes, heart health, human behavior and weight loss. To be top-rated, a diet had to be safe, relatively easy to follow, nutritious and effective for weight loss. It also had to be stellar at preventing diabetes and heart disease(1).

The popular and easy to follow Mediterranean reﬂects the traditional foods and social customs of people living in countries with coastlines along the Mediterranean Sea. Its origins date back thousands of years to the local cuisine and lifestyle of people living in southern Italy, Greece, Spain and Turkey. Despite the word “diet” in its name, the Mediterranean Diet is more than a set of dietary guidelines—it is a holistic way of life that promotes superior health and longevity, not just to people of the region, but to followers of its tenets worldwide.

Researchers have studied the health effects of the Mediterranean Diet lifestyle since the 1950’s. Early findings emerged out of The Seven Countries Study, which began in 1957. The study was conceived and directed by Ancel Keys, Ph.D., a University of Minnesota scientist who brought together researchers from all over the world to collectively study the medical questions of the time concerning cardiovascular diseases among people living in countries with varied traditional eating patterns and lifestyles. The Seven Countries Study was the first multi-country, multi-year epidemiological study to systematically examine the relationship between lifestyle, diet, coronary heart disease and stroke in populations from seven different regions of the world. The long-running study examined the health of nearly thirteen thousand men, age 40-59 years old, living in the United States, Italy, Greece, then-Yugoslavia, the Netherlands, Finland, and Japan(2).

The result of the Seven Countries Study showed that the men with the lowest rates of heart disease ate a diet low in saturated fat, high in monounsaturated fat, and rich in fresh fruits, vegetables, whole grains, beans, and ﬁsh. The healthiest men were residents of the Greek island of Crete, located in the Mediterranean Sea off the southern coast of Greece. It was from this extensive study that the connection between the centuries-old Mediterranean-eating patterns and superior health among people of the region were significantly correlated.

The concept of a therapeutic use of the Mediterranean Diet took hold around the world in the 1990’s when Walter Willett, M.D., Professor and Chair of the Department of Epidemiology and Nutrition at Harvard School of Public Health publicized the diet as an easy, delicious and useful way to aid weight loss and improve heart health and other chronic illnesses. Consequently, the Mediterranean diet is now considered by health experts as the most “heart-healthy” diet in the world and has been proven to protect against the development of many other diseases, such as cancer, type-2 diabetes, obesity, dementia, depression, Alzheimer’s and Parkinson’s(3).

There is no one exact Mediterranean Diet because the guidelines reflect different foods, eating patterns, and lifestyles from multiple countries bordering the Mediterranean Sea. However, there are similarities among all the countries that define the traditional Mediterranean eating pattern. An American version of the diet includes foods that are more accessible in the United States in place of traditional foods of the Mediterranean. These include cow’s milk dairy products instead of goat and sheep dairy, and canola oil in place of olive oil. I do not recommend making these substitutions. 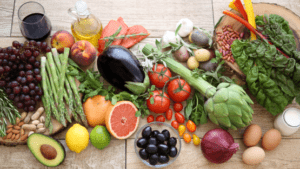 Aside from the fact that processed foods are not included, the Mediterranean Diet is unrestrictive and simple. Calories are not a concern—its foundation is built upon anti-inflammatory plant-based meals with a focus on deeply colored fresh fruits and vegetables (especially green leafy types such as chard, kale and spinach, and non-starchy vegetables like artichokes, cauliflower, eggplant, fennel and tomatoes), herbs and spices (like basil, bay leaves, garlic, fennel, oregano, parsley, rosemary and sage), legumes (especially cannellini beans, fava beans, lentils and chickpeas), whole grains (Arborio rice, barley, buckwheat, bulgur, farro, freekeh, millet, oats, polenta, whole grain pastas and authentic sourdough bread made from whole grain flour and live cultures), and healthy unprocessed fats. There is no limit on fat intake, as long as monounsaturated fats are in the majority—mainly from nuts and seeds (almonds, cashews, pine nuts, pistachios, sesame seeds and walnuts), olives and cold pressed extra virgin olive oil. It is recommended to consume one small handful (30 grams) of nuts per day.

Also included, in lesser amounts, are wild-caught fish and seafood (about one to two times a week), poultry (about one to two times per week), and eggs from chickens, ducks, and quail (about 4 eggs per week). Red meat consumption is discouraged or only consumed infrequently on special occasions or about once or twice a month. Cow’s milk does not figure prominently in traditional Mediterranean diets—rather dairy products are made from raw goat or sheep’s milk. Traditional cheeses of the Mediterranean include sharp pecorino cheese made from fermented sheep’s milk (a cheese similar to parmesan) and feta from goat milk. The American version of the Mediterranean Diet includes small portions of yogurt or cheese from cow’s milk.

Dark chocolate has also become part of the American version of the Mediterranean Diet, but it could never be a part of the traditional diet due to the fact that cacao trees can only grow within about 20° north and south of the equator—which is a long way south of the Mediterranean. In other words, cacao trees thrive in rainforests, and do not fare well outside of the equatorial belt.

Finally, red wine is consumed regularly but moderately in the traditional Mediterranean Diet. “Moderately” means up to one ﬁve-ounce glass of red wine per day for women and up to two ﬁve-ounce glasses per day for men. The American version of the Mediterranean diet advises not to start drinking wine if one is not already doing so, and people should not drink wine if it is contraindicated with medications or health conditions, or if they have a problem with alcohol abuse.

The combination of diet and lifestyle factors are what provide the myriad health benefits attributed to the Mediterranean Diet. In addition to the diet, regular natural physical activity, such as walking, spending quality time with loved ones and sharing meals are tantamount to the efficacy of the Mediterranean Diet lifestyle.

If you are considering adopting a healthier lifestyle, the positive aspects of the Mediterranean Diet are obvious. There are no calorie restrictions, it is high in fresh produce, and it includes a variety of foods from all food groups, including red wine and dark chocolate. It is widely known to be one of the most successful and sustainable diets to support overall health and wellbeing. It could be suitable for omnivores and vegetarians alike, depending on food choices, and it can be modified to be gluten-free.

The only downside I see with the Mediterranean Diet is that if someone likes to eat red meat frequently, they may feel like they are missing out.

All in all, the Mediterranean Diet is an enjoyable lifestyle that has something to offer most everyone.

Note: You may be thinking, I thought the seven countries study was bogus because Ancel Keys actually studied 22 countries and cherry picked data from only seven of those countries to fit his hypothesis that high saturated fat and cholesterol in the diet causes heart disease.

If you are thinking that, you would be right. However, while Ancel Keys’ saturated fat myth does not stack up, the Mediterranean Diet stands on its own as a very healthy diet. It just so happens that Ancel Keys was the first researcher to study its benefits.

Link to Dee’s Podcast on this subject