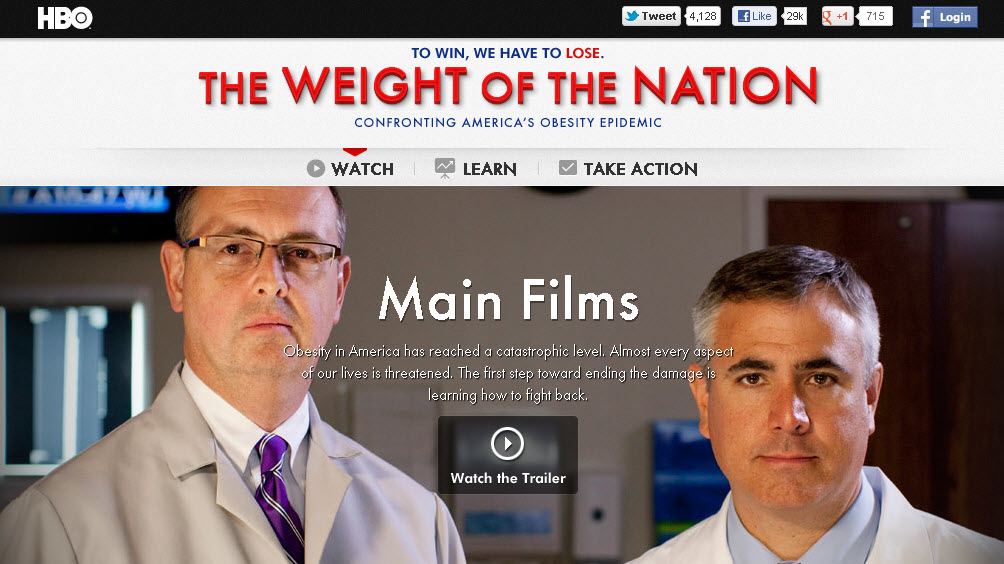 “The weight of the nation is out of control, but we can fix that.”  That is the resounding message of a four-part documentary series airing on HBO. The turning point at which our nation stands today, is not that much different from where I stood twenty years ago. 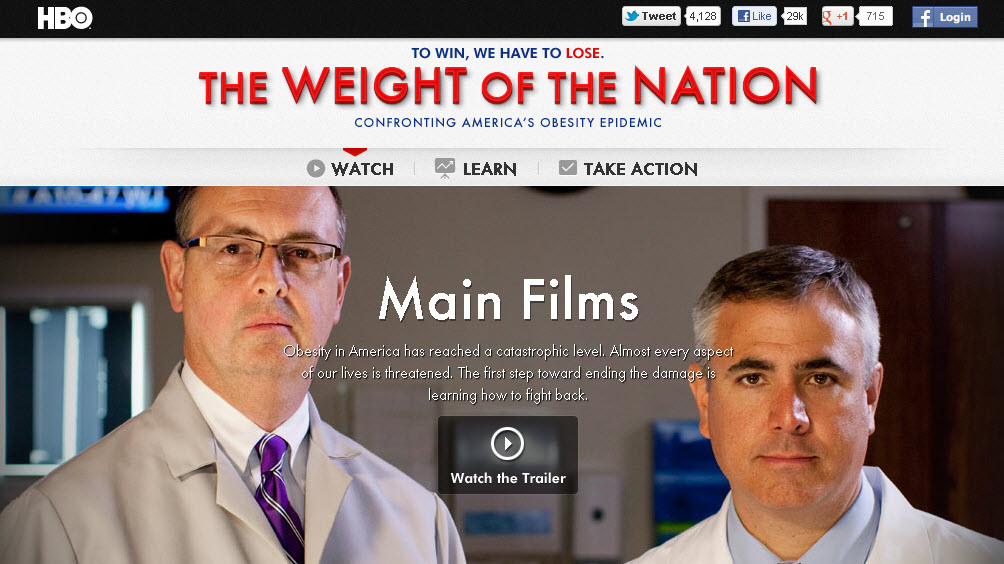 In April 1992, I was literally brought to my knees by a savage awareness that processed foods were killing me.  I had been overweight since childhood, and by the time I was thirty, I had dieted my way into seemingly permanent obesity.  Carrying 210 pounds on my 4’10” petite body frame, I was twice the normal weight for someone my height.

At that time, the words of one of the experts featured in The Weight of the Nation, were true for me as well: “Obesity is the biggest threat to the health and welfare of this country.  It’s not only about health; it’s about survival and well-being.”  After a harrowing hiking experience, I understood that for me, weight loss was more about my survival than anything else.  I decided to make healthy eating the single most important thing in my life without exception.  One bite at a time, I studiously removed processed foods from my life and replaced them with the real foods our body is designed to eat. In April of this year, I tallied twenty years of sustaining a 100-pound weight loss. The details of how I changed my life (and how you can change yours) are in my book The Science of Skinny.

As I mark this milestone anniversary, I can’t help but feel an odd sense of irony. In the two decades that I have kept my weight off, obesity has become a chronic illness in the U.S. that has reached epidemic proportions.  While I have continued to keep processed foods out of my life, the food industry has been adding more to everyone else’s.  Weight gain used to be a matter of eating too much food, and for some people that is still the case.  But for many, especially children, the weight gain of today is characterized by forces no pre-1990’s glutton ever had to contend with.  Highly refined carbohydrates, processed cooking oils, and an unbelievable myriad of food additives have been linked to unforeseen and powerful chemical reactions in the body and brain, inducing obesity at rapid and alarming rates.

In September 2011, researchers at the University of California Irvine published research that found that the types of oils used in starchy foods such as French fries and potato chips trigger the body to produce natural marijuana-like chemicals called endocannabinoids. Endocannabinoids make these foods irresistible and stimulate a biological mechanism that encourages gluttonous behavior.  In other words, when you eat foods cooked in these types of processed cooking oils, your body is hijacked to get the munchies in much the same way people do when they smoke marijuana.

In 1968, Dr. John Olney discovered that monosodium glutamate (MSG) creates a biochemical disturbance that triples the amount of insulin the pancreas creates, leading to a change in metabolism and fat storing mechanisms inducing obesity in a very short amount of time. The obesity-effect of MSG is so reproducible that scientists purposefully use MSG to induce obesity in laboratory animals to study the effects of obesity and diabetes.  These are only two examples of how food additives and food processing wreak havoc on our normal body chemistry.  Regular consumption of refined sugar and high fructose corn syrup create different, yet equally devastating, routes to quick obesity.  The synergistic effect has not been studied, but we can see that this type of obesity is aggressive, stubborn, and more deadly than ever. The rates of diabetes, heart disease, and cancer also have risen dramatically over the last two decades.

I found the documentary not just informative, but inspiring and touching as well.  Each part features case studies, interviews with leading experts, and individuals and their families struggling with obesity. Part One, CONSEQUENCES, lays out the scope of the obesity epidemic and explores the serious health consequences of being overweight or obese.  This is where we hear all the staggering statistics that have been ignored thus far.  But we also get to see the individual human side of the problem.  Asked to describe life as an obese person, more than one interviewee honestly shared their sense of isolation and limitation.  “It’s like I’m in some kind of prison,” one said. I strongly related to that statement, as I often felt imprisoned by my weight, and separate from other people on many levels.  Consequently, I always felt lonely even in a crowded room.

Some also feel they’ve been deceived by the food industry and the government, led to believe that their consumption of snack foods, sugary cereals, sodas and juices too, is safe and even desirable, that such choices don’t have deleterious consequences, either immediate or delayed. After all, the marketing of such foods is legal, as are the use of food additives, which are supposedly “safe”.

One consequence that was not pointed out, but one that I would have liked to see, is the way science and researchers deal with the effects of food additives on our biochemistry.  For instance, the researchers who discovered that fatty foods create natural chemicals in our bodies called endocannabinoids that make us want to eat more, suggested that the findings open up the door for the development of a new drug that would block the receptor sites for endocannabinoids, to stop the overeating mechanism.  Rather than encouraging people to stop eating foods made with processed cooking oils, they want to create a drug that allows people to continue eating foods that damage their health!

Part Two, CHOICES, explores ways to address the obesity problem and what science has shown about how to lose weight, maintain weight loss and prevent weight gain. Several approaches are documented, including one called “Mindful Eating” that is being studied at the University of California San Francisco.  Mindful eating means paying attention to what and when you eat, learning to make choices based on actual hunger and learning to value the quality of your food.  In my opinion, mindful eating is an important good beginning, but one must also know how processed foods hijack your ability to even discern whether or not you are hungry.  Learning to value the quality of your food also means learning to value yourself: a more important factor in weight loss than anything else.

As many can attest, losing the weight is the easy part. The hard part is that you have to change your lifestyle for the rest of your life if you want to keep it off. People such as myself who have kept weight off for many years, will tell you that many behavioral, social, eating and thinking patterns had to be permanently altered.   The documentary makes a consistent basic argument to those who want to lose weight: educate yourself and act on what you learn. I couldn’t agree more.

Part Three, CHILDREN IN CRISIS, documents the damage obesity is doing to our nation’s children. Through individual stories, this part describes how the strong forces at work in our society are causing children to consume too many calories and expend too little energy; tackling subjects from school lunches to the decline of physical education, the demise of school recess and the marketing of unhealthy food to children. The multibillion-dollar food and advertising industries, and public officials are highly criticized for not only failing to fix the problem but actually making it worse.

Today’s children are likely the first generation of children who are going to have a shorter life expectancy than their parents.  NIH director Francis Collins warns, “If you were told your child was at risk for cancer, that would get your attention. If you were told your child is at risk for some sort of brain disease, that would get your attention. Well, obesity ought to be on that list.”

We can no longer call obesity a matter of personal responsibility.  When children as young as 6 months old are obese, it is not their fault.  They are living in a toxic food environment, and the environment needs to change just as much as each individual and family needs to take responsibility for their own health, despite the environment.

Part Four, CHALLENGES, examines the major driving forces causing the obesity epidemic, including agriculture, economics, evolutionary biology, food marketing, racial and socioeconomic disparities, physical inactivity, American food culture, and the strong influence of the food and beverage industry.  Almost every aspect of our lives is threatened, and the first step toward ending the damage is learning how to fight back.

“Weight of the Nation” encourages viewers to feel responsible for their own lives and to make informed choices.  It is filled with provocative and sometimes scary information. But the most empowering take-away in the series is that the nation’s weight crisis can be reversed. So, for that matter, can an individual’s weight crisis.  I reversed my weight crisis.  You can too.

“The Weight of the Nation,” HBO, http://theweightofthenation.hbo.com/films