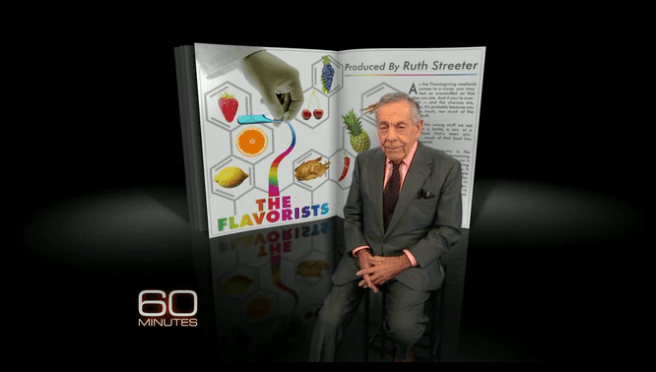 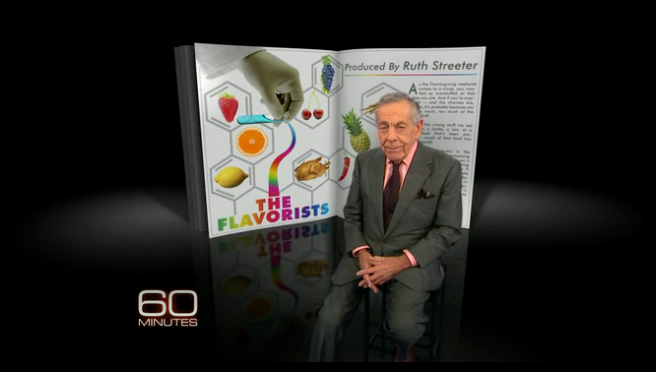 CLICK HERE OR THE ABOVE IMAGE TO VIEW 60 MINUTES SEGMENT

On November 27th, 2011, the CBS news show 60 Minutes aired a segment called “The Flavorists: Tweaking Tastes and Creating Cravings” – an investigative look into the multibillion dollar “natural” flavoring and artificial flavoring industry – an industry cloaked in secrecy.  Just the word “industry” might give you a clue that the “natural flavor” in your ice cream, soda, yogurt, or soy milk is not what it may seem.  Manufacturers adorn their packaging with images of fruits or vanilla beans, but in reality there is not a spec of anything real or natural in those flavors.

I’ve been writing about processed foods and chemical additives for many years now. As a chemist myself, I found this segment fascinating, but not surprising.   But many of the people I’ve talked to are shocked and outraged by the blatant, and even arrogant pride of the industry scientists who create flavors that are designed to overstimulate our taste receptors and hijack our brains into addiction.

The segment begins by showing the “flavorists” – a group of scientists who create flavors for the processed food industry – in a citrus grove smelling and tasting mandarins and tangerines.  After all, they have to get their inspiration from somewhere.  Morley Safer, the 60 Minutes correspondent, stated “they get their inspiration from the greatest flavorist of them all: Mother Nature. The next scene shows one of scientists inserting a calibrated syringe into one of the mandarins to get a sample of its juice. When they find something they like, they extract its flavor molecules from the fruit on the tree. Seems pretty harmless, and even almost natural at this point.  But that’s when the “natural” ends, and the food chemistry begins.  Back in the lab, they mimic Mother Nature’s molecules with chemicals.1

From this point on is where the segment gets very disturbing. Not only do the scientists synthesize flavors from chemicals and then call them “natural flavors”, they specifically create flavors that are ADDICTIVE – so much so that they even manipulate the formulas so the tastes dissipate quickly, prompting you to continue eating to get more of the flavor.  The goal is to get you to buy and consume the product over and over again.  In fact, according to the segment, the flavoring industry is the enabler of the food processing business. Natural and artificial flavors are in nearly every processed and packaged food, including fast foods and unfortunately this also includes “health foods”. In one scene they showed powdered chicken flavoring that is added to “healthy” frozen dinners to make it taste just like the real thing – only they make it taste stronger and better than the real thing.

Natural flavors listed on food ingredient lists might not have ever met their natural namesake. All flavors created in the lab are combinations of chemicals – artificial flavors are largely manmade. Natural flavors derive from nature, but not necessarily from what the label implies. For example, strawberry and vanilla flavor can come from the gland in a beaver’s backside.  What they do is just manipulate the molecules and create with them to give the impression of something natural, like a papaya or a strawberry.

What the segment did not cover is just what’s in some of those flavorings.  And that’s where I see the trouble lies.  It is why it’s so difficult for people to change their diets so they can lose weight or improve their health.  They are so addicted to the flavors created in laboratories that the crunch of a carrot, the refreshingly sweet juice of a fresh mango, or the zing of fresh garlic no longer satisfies them. Natural whole foods seem boring to many people, so they opt not to eat them.

The bigger problems lies in what those chemicals do to our bodies.  Nobody really knows.  The solution?   Re-program your taste buds by getting the fake stuff out of your life.  Do what one commenter posted on the CBS website,  – I for one am going back to the old way of eating; like my grandmother use to cook, everything from scratch. The world wouldn’t be so fast paced if we the people would just slow down. Then there wouldn’t be such a high demand for fast food, or convenience food either. Let’s get back to living, instead of eating ourselves to death.

In other words, eat processed-free.  Real foods with real ingredients.

1 From the script of the 60 Minutes segment “The Flavorists” which aired on Nov. 27, 2011. Morley Safer is the correspondent, Ruth Streeter is the producer.