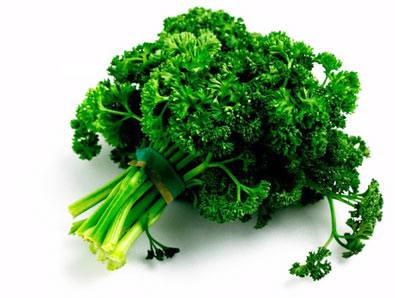 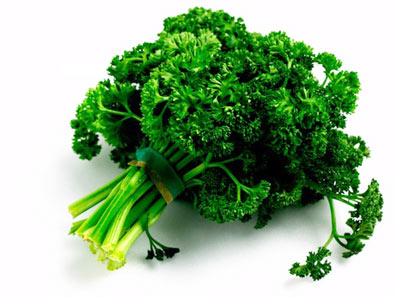 Did you know that parsley—that little bunch of curly greens that garnish restaurant plates—is one of the world’s seven most potent disease-fighting spices?  It’s right up there with ginger, oregano, cinnamon, turmeric, sage and red chili peppers.  I can’t remember exactly when I first started eating my plate garnish, and then buying a bunch of parsley each week to incorporate into my meals, but it had to be right around the time I learned of the nutritive power contained in this under-appreciated vegetable.

Although parsley is the world’s most popular culinary herb, it has health protective properties that rival those of many green leafy vegetables. When it comes to nutrition, parsley has you covered.  It contains high levels of beta carotene (vitamin A), vitamin B12, folate (vitamin B9), chlorophyll, calcium, more vitamin C than citrus fruits, more vitamin K than kale, spinach and collard greens, and many other essential nutrients.  Additionally, parsley contains two classes of unusual components—volatile oils and antioxidants called flavonoids—that provide unique health benefits.

Here’s what’s unique about the Power of Parsley:

Anti-Cancer Power
Parsley’s volatile oils—particularly one called myristicin—have been shown to inhibit tumor formation in animal studies, and particularly, tumor formation in the lungs. Myristicin has also been shown to activate glutathione, the powerfully helpful compound involved in liver detoxification. The activity of parsley’s volatile oils qualifies it as a “chemoprotective” food, and in particular, a food that can help neutralize particular types of carcinogens (especially those found in cigarette smoke and charcoal grill smoke). Parsley’s volatile oils are also what gives it its legendary ability to freshen your breath at the end of your meal.

Antioxidant Power and Anti-Inflammatory Power
The flavonoids in parsley—especially one called luteolin— have been shown to function as antioxidants that combine with highly reactive oxygen-containing molecules (called free radicals).  Luteolin is a strong antioxidant that searches out and eradicates free radicals in the body that cause damage to the cells. Luteolin also promotes carbohydrate metabolism and serves the body as an anti-inﬂammatory agent. In addition to its flavonoids, parsley is an excellent source of two other antioxidant nutrients—vitamin A and vitamin C—that are also important for the prevention of many diseases.

Vitamin A Power
Parsley contains high amounts of the carotenoid beta-carotene which is converted to vitamin A in the body.  Beta carotene is a powerful antioxidant that helps protect the liver, lungs and colon from free radical damage caused by toxins. Vitamin A is important for your eyes, skin and immune system and is also used for protein assimilation.

Vitamin C Power
Parsley contains more vitamin C than any other standard culinary vegetable, with 80 mg per cup of fresh parsley (106% of the RDA). Famous for boosting the immune system, vitamin C is also a key nutrient for the health of the adrenal glands.  Along with luteolin, the vitamin C found in parsley serves as an effective anti-inﬂammatory agent within the body.  When consumed regularly, vitamin A and vitamin C combat the onset of inflammatory disorders, such as osteoarthritis (the degeneration of joint cartilage and the underlying bone) and rheumatoid arthritis (a disease causing inﬂammation in the joints).

Immune System Boosting Power
A strong immune system is the key to warding off germs, viruses and diseases, and repair of damaged tissue and broken bones.  The antioxidant power of vitamin C and vitamin A found in parsley both strengthen the body’s immune system, but in different ways. Vitamin C is necessary for collagen, the main structural protein found in connective tissue. This essential nutrient will not only accelerate the body’s ability to repair wounds, but also maintain healthy bones and teeth.  Vitamin A, on the other hand, fortifies and protects the body’s entry points, such as mucous membranes, the lining of the eyes, and respiratory, urinary and intestinal tracts. It keeps germs and infections at bay.  Moreover, white blood cells rely on vitamin A to ﬁght infection in the body.  Vitamin A is a nutrient so important to a strong immune system that its nickname is the “anti-infective vitamin.”

Vitamin K Power
Parsley is loaded with vitamin K—just 2 tablespoons of raw parsley contain 124 mcg or 155 percent of the RDA. The body uses vitamin K to help blood clot properly and to make osteocalcin, a protein that strengthens the compositon of our bones.  It is necessary for bones to get the minerals they need to form properly. Vitamin K also prevents calcium build-up in our tissues that can lead to atherosclerosis, cardiovascular disease and stroke. Finally, the body uses vitamin K to make the fat needed to maintain the myelin sheath around our nerves, to protect and strenghten our nervous system as a whole.

Folate and Heart Health Power
Folate, also called folic acid or vitamin B9,  is one of the most important B vitamins.  In addition to being an important nutrient for pregnant women, one of its most critical roles in relation to cardiovascular health is to convert homocysteine into benign molecules. Homocysteine is an amino acid that occurs in the body and can threaten the body’s blood vessels when its levels become too high.  At high levels, homocysteine increases the risk of heart attacks and stroke in people with atherosclerosis or diabetic heart disease. The folate found in parsley helps convert homocysteine into harmless molecules, thereby helping to ward off cardiovascular diseases, such as heart attack, stroke, and atherosclerosis.

Folic acid is also a critical nutrient for proper cell division and is therefore vitally important for cancer-prevention in two areas of the body that contain rapidly dividing cells—the colon, and in women, the cervix.  One cup of parsley contains a whopping 23 percent of your daily requirement of this crucial vitamin.

Chlorophyll Power
Parsley is abundant in chlorophyll, which purifies the blood and inhibits the spread of bacteria, fungi and other organismsChlorophyll also suppresses viruses and helps the lungs to discharge residues from environmental pollution.  It has  potent antioxidant properties and is effective in preventing and treating many types of cancer.

Iron Power
Iron is the transporter of oxygen to your tissues and also rids the body of carbon dioxide, and parsley is an exceptional source of it.  A half-cup of fresh parsley or one tablespoon dried has about 10 percent of your daily iron requirements. Plus, parsley has an abundance of the vitamin C your body needs to absorb iron, so it’s a very effective source of it.

Vitamin B12 Power
Parsley contains traces of B12 producing compounds. Such compounds are needed for the formation of red blood cells and normal cell growth, important for fertility, pregnancy, immunity and the prevention of degenerative illness. The action of vitamin B12, however, is inhibited by birth control pills, antibiotics, intoxicants, stress, sluggish liver, and excess bacteria or parasites in the colon or digestive tracts. Parsley helps to counteract these inhibitors.

Protein, Calcium and Many other Powers
Parsley contains the essential amino acids that the body uses to make proteins.  Twenty percent of its calories come from protein, about the same amount of protein as mushrooms.  One cup of raw parsley also contains nearly the same amount of calcium as one cup of raw kale (82.8 mg vs. 90.5 mg respectively), and the calcium in parsley and kale is more absorbable than the calcium in milk.  Parsley also contains phosphorus, potassium, manganese, inositol, and sulphur—all important nutrients for overall long-term health.

So, next time parsley appears on your plate as a garnish, recognize its true powers and partake of its abilities to improve your health. As an added bonus, you’ll also enjoy parsley’s legendary ability to cleanse your palate and your breath at the end of your meal.

Enjoy raw parsley sprigs added to salads or soups, or sprinkle chopped parsley on top of scrambled eggs. Toss it into rice or quinoa, and use dried parsley in recipes.

LINK TO DEE’S PODCAST ON PARSLEY 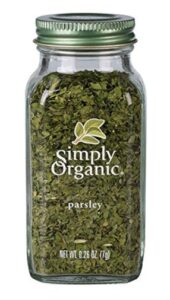 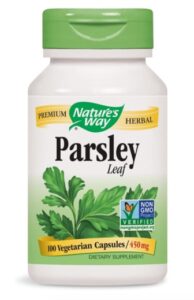