There are eight different B-Vitamins that exist in our foods. When speaking of them as a whole group, they are called “the B-Vitamin Complex” or “B-family” vitamins. They are a group of water-soluble compounds that have unique yet interrelated functions in the body. Two or more of the B-vitamins always occur together in foods because they need each other to carry out many vital functions in the body.

The main role of B-vitamins is to act like catalytic spark plugs, igniting and speeding up many biochemical reactions in the body such as converting macronutrients—carbohydrates, proteins and fats—into energy. They are also important for healthy skin, eyes, hair, liver detoxification, optimal nervous system functioning, adrenal function and stress reduction, and much more. Although they work together, each B-vitamin has a unique role in the body and provides different health benefits.

The Many Roles of Vitamin B6

The term “vitamin B6” makes it sound like it’s only one nutrient, but that is not the case. Vitamin B6 is a term that refers to a group of six related compounds that have similar activity in the body.  These forms include pyridoxal 5′-phosphate (PLP), which is known to be the most active form as a human vitamin.  Other forms include pyridoxal (PL), pyridoxamine (PM), pyridoxine (PN), pyridoxamine 5′-phosphate (PMP) and pyridoxine-5′-phosphate (PNP).  These vitamin B6 compounds are involved in over 100 biochemical reactions that are important for maintaining a healthy body and brain. They are involved in energy production, cardiovascular health, brain health, neurotransmitter production, red blood cell formation, liver detoxification and more.

One example of how important vitamin B6 is for proper brain and nervous system function is the development of a condition called pyridoxine-dependent epilepsy.  This occurs when a genetic mutation interferes with normal vitamin B6 function. In people who have this genetic mutation, epileptic seizures are experienced beginning in infancy because the brain has not developed properly. Fortunately, this is a rare condition.

However, many people may suffer from more common symptoms of vitamin B6 deficiencies that can be corrected.  Depression, which is related to low production of seratonin, is associated with low intake of vitamin B6.   Studies show that the risk of depressed mood is higher in people with lower levels of vitamin B6 in their diet (compared to the general population).  Other studies show the link between risk of depression and B6 intake becomes even stronger when dietary folate (vitamin B9)—which works very closely with vitamin B6 in brain and nervous system chemistry—is deficient as well.  Recent research also shows a link between vitamin B6 deficiency and risk of developing ADHD (attention deficit disorder) due to low levels of GABA in the brain.

Vitamin B6 is also involved in production of norepinephrine, also known as adrenaline (which helps your body cope with stress), and melatonin, which is important in helping regulate sleep cycles.  Is is also needed for production of hemoglobin, a main component of red blood cells that carries iron and oxygen to cells for production of energy.

Vitamin B6 is also involved in maintaining a healthy immune system (for example, it promotes formation of antibodies that fight infections).

Food Sources of Vitamin B6 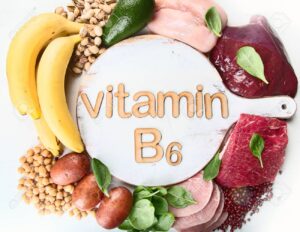 B vitamins are water soluble, which means that they are not stored in the body and must be consumed daily. Though a major deficiency in vitamin B6 is rare, many people may have a slight deficiency which can still impact their health.

Since the body can so easily run out of vitamin B6, it is important to consume foods that contain it. Some of the best sources of vitamin B6 include fish, seafood, lean meats such as beef and organ meats, turkey, chicken, eggs, legumes (beans, peas and lentils), nuts, seeds. Potatoes and other starchy vegetables, dark leafy greens, and fruits (except citrus) also contain B6.  Berries, papayas, cantaloupe and bananas are very good sources of vitamin B6.

Groups at Risk of Deficiency

People who have trouble absorbing vitamin B6 from food or dietary supplements can develop a deficiency. They include those with kidney disease, alcoholism, hyperthyroidism, autoimmune disorders such as rheumatoid arthritis, and inflammatory bowel disease such as celiac disease, or Crohn’s disease.

For those with rheumatoid arthritis, low vitamin B6 levels are due to the inflammation caused by the disease and, in turn, increase the inflammation associated with the disease.  People with celiac disease, Crohn’s disease, ulcerative colitis, inflammatory bowel disease, and other malabsorptive autoimmune disorders also tend to have low plasmaB6 levels.  The mechanisms for this effect are not known. However, celiac disease is associated with lower pyridoxine absorption, and low PLP concentrations in inflammatory bowel disease could be due to the inflammatory response.

Symptoms of vitamin B6 deficiency include weak immune system, anemia, itchy rashes, scaly skin on the lips, cracks at the corners of the mouth and a swollen tongue. Other symptoms of a very low vitamin B6 levels include depression and confusion.

Effects of Excessive Vitamin B6 Intake

It is not possible to consume excessive amounts of vitamin B6 from foods, although supplements in high doses may cause toxicity.  Symptoms such as dizziness, nausea, sensitivity to sunlight and nerve damage can occur when people regularly take over 200 mg daily in supplement form.

Persistent consumption of excessively high doses of vitamin B6 can cause severe sensory nerve damage, leading to numbness in the feet, sensory changes and loss of control of bodily movements. High doses above 200 mg per day is not recommended for long-term use.

Link to Dee’s Podcast “The Benefits of Vitamin B6” 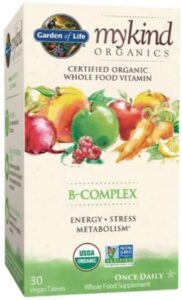