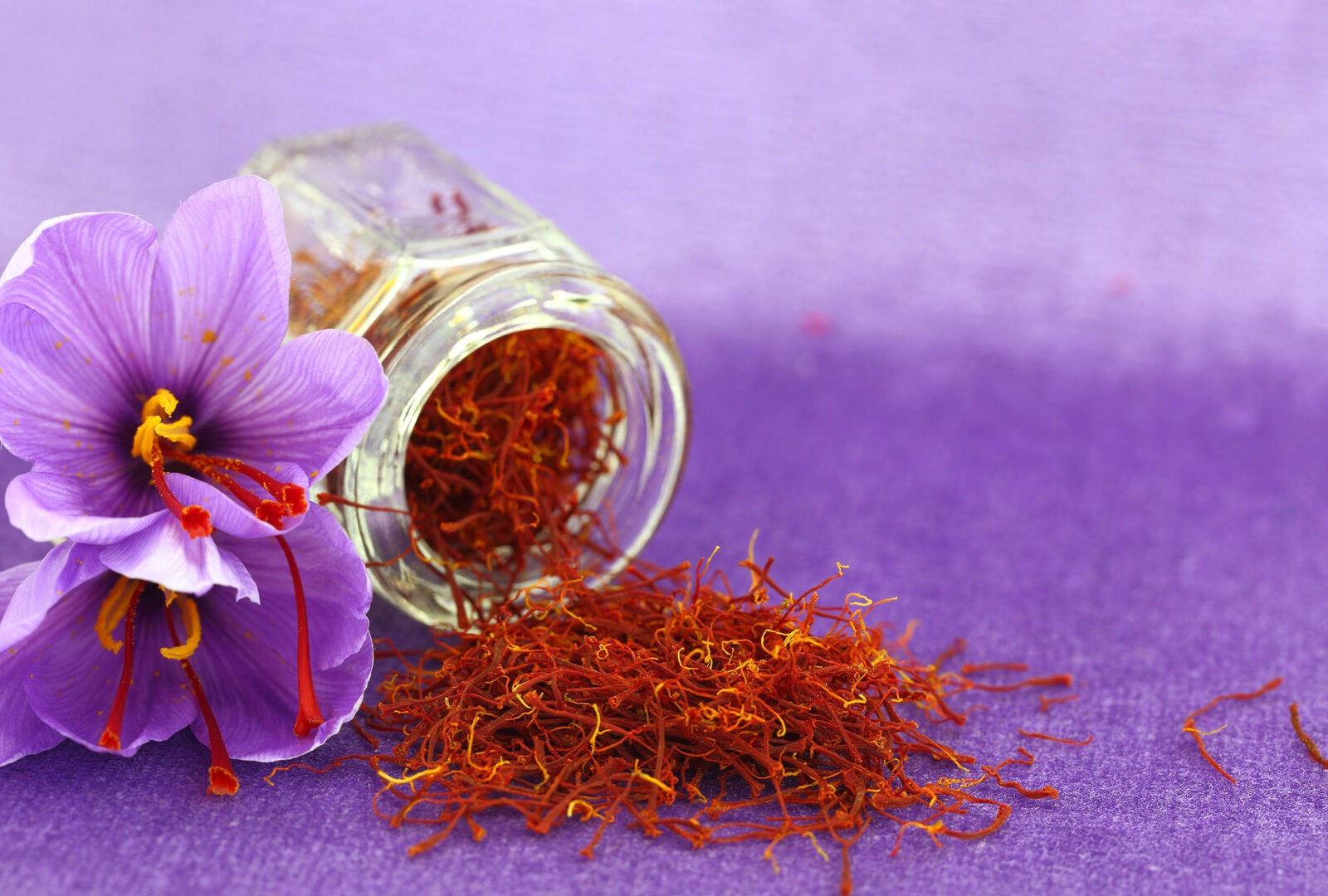 Did you know that saffron, the world’s most prized spice, is more than just a culinary wonder?

Recently, saffron and its active component crocin, which provides the red color, have garnered the attention of modern scientists who have discovered it has protective effects on the brain, helps to balance moods, controls appetite to help with weight loss, repairs damage to the retina of the eyes, and slows cognitive decline.  Saffron has been shown to be just as effective as antidepressant drugs like Zoloft and Prozac, and Memantine, a prescription drug for Alzheimer’s, but much safer. 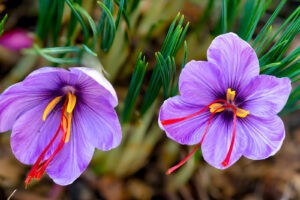 Saffron is the star ingredient in saffron rice and in dishes like Spanish paella.  Although it changes the color of white rice to a bright yellow, the spice is actually a deep red hue.  Saffron is harvested from the Crocus sativus flower—a relative of the iris.   Each flower produces three yellow styles, each of which ends with a crimson-red stigma. The combination of golden style and crimson stigma constitute what we know as a saffron thread.

If you’ve ever needed saffron for a recipe, you know that it’s a pricey little spice.  The high price tag owes to the fact that the flowers only bloom for one week each year during the fall.  Each flower produces only three threads (stigmas) of saffron.  Once a flower blooms, it must be harvested that same day, because it begins to wilt almost immediately.  Each thread must be plucked –by hand!—in the mid-morning when the flowers are still closed in order to protect the delicate threads inside. Once plucked, they are dried and ready for market.  It takes a minimum of 1,000 flowers to produce just one ounce of dried saffron, and about 50,000 flowers to obtain one pound.  Considering the intensive work needed for a comparatively small yield, it’s understandable why you’ll pay $10 to $15 for a small amount of saffron. 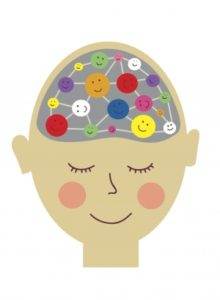 Saffron’s antidepressant effects are due to multiple compounds in the plant, such as safranal, crocin and safromotivines, working on different part of the brain.  For example, saffron increases the levels of serotonin and dopamine, two important mood-elevating neurotransmitters in the brain. It also modulates the stress response by lessening the effects of cortisol, a stress hormone that causes increases anxiety, depression, weight gain and more when chronically elevated.

Lastly, it also protects brain cells by exerting anti-inflammatory effects in the brain. Increasing amounts of research indicates that inflammation within the brain is often a key factor in depression.

Antidepressant medications often come with a laundry list of side effects, such as loss of libido, erectile dysfunction, weight gain, and more. Saffron offers a safe natural alternative to these medications without side effects.

For example, one of the side of effects of selective serotonin reuptake inhibitors (SSRIs) like Prozac (fluoxetine) is that it leads to loss of libido and erectile dysfunction. However, saffron has been shown to improve sexual function in men taking these drugs.  A four-week randomized double-blind placebo-controlled study was conducted on thirty married men with major depressive disorder (MDD) who had their mood improved with Prozac, but they experienced impaired sexual desire and function. After four weeks of taking 30 mg/day of saffron extract, Their erectile function and intercourse satisfaction significantly improved compared to the placebo group.  Nine patients (60 percent) in the saffron group achieved normal erectile function while only one patient in the placebo had this outcome. There were no side effects with saffron extract. This study showed that saffron is safe to use with conventional antidepressant drugs and may offset some of their side effects.

Since saffron extract has effects of its own including several studies showing equal effectiveness to Prozac in mild to moderate depression, this study shows that conventional antidepressants may not even be necessary.

Saffron as Slimming Agent and Healer of Metabolic Disorders

Research has found an association between the compounds in saffron and their possible anti-obesity potential.  The scientific evidence shows that saffron has a potential to combat against overweight/obesity and related metabolic disorders such as high cholesterol and triglycerides, diabetes and cardiovascular disease, owing to its high antioxidant activity and ability to stop internal inflammation, which is the key underlying root cause of most modern disease.

In addition, saffron is also a powerful appetite suppressant and has been shown in studies to vastly reduce snacking and emotional eating behaviors. 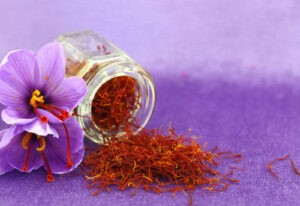 Researchers at Tehran University have studied saffron’s cognitive effects for many years.  Their most recent study on saffron and Alzheimer’s disease was the longest yet on the topic, running fo a full year.

The study involved sixty-eight Alzheimer’s patients who consumed either 30 mg/day of saffron extract or 20 mg/day Memantine, a prescription drug for Alzheimer’s. Each month the subjects submitted to cognitive tests to measure any cognitive decline during the study. After a year, researchers found that those taking saffron had similar improvement in scores as those taking the medication, suggesting that saffron may be as effective as the Alzheimer’s drug in slowing cognitive decline.  Previous studies have shown similar results compared to leading Alzheimer’s medications.

Researchers theorize that crocin, the active component of saffron, may be effective against cognitive disorders because it may inhibit the overgrowth of beta amyloid plaques in the human brain, which are believed to be a major cause of Alzheimer’s.  It also has potent anti-inflammatory effects in the brain. 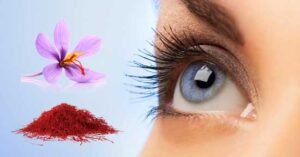 Macular Degeneration is the leading cause of  vision impairment in people over the age of 55, affecting more than 10 million Americans. At present, it is considered by the medical community as an incurable eye disease.

Macular Degeneration is caused by the deterioration of the central portion of the retina, the inside back layer of the eye that records the images we see and sends them via the optic nerve from the eye to the brain. The retina’s central portion, known as the macula, is responsible for focusing central vision in the eye, and it controls our ability to read, drive a car, recognize faces or colors, and see objects in fine detail.

However, saffron has been shown to protect and prevent the steady breakdown of light-sensitive cells in the center of the retina, the macula. This addresses the root cause of age-related macular degeneration and improves light sensitivity, a major manifestation of the disease.

Several clinical studies have discovered that supplementing with saffron (20 mg/day) can improve visual acuity as well as sensitivity to light, even in people with early macular degeneration. More impressively, patients experienced improvement in vision that was measured by them seeing an average of two additional lines on the eye chart commonly used by physicians to test vision.

How Much Saffron Do You Need?

You can use saffron in cooking, but you’re not likely to get the research-backed effective dose just by eating a bowl of bright yellow rice. If you want the mood, brain, and other benefits, you’ll need the therapeutic doses used in clinical studies, which can only be found in supplement form.

You can find saffron as a supplement by itself or as a component in a formulated mood blend with other botanicals that provide a synergistic effect on brain function.

Saffron is safe and generally well tolerated in food amounts.

When taken in doses higher than food amounts, there are some possible side effects, such as dry mouth, anxiety, agitation, drowsiness, low mood, sweating, nausea or vomiting, constipation or diarrhea, change in appetite, flushing, and headache. Allergic reactions can occur in some people.

To minimize any risk of side effects, consult a physician or clinical nutritionist for proper dosing.

Link to Dee’s podcast on this subject 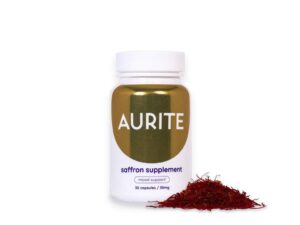 Ranjbar, H., & Ashrafizaveh, A. (2019). Effects of saffron (Crocus sativus) on sexual dysfunction among men and women: A systematic review and meta-analysis. Avicenna Journal of Phytomedicine, 9(5), 419–427.