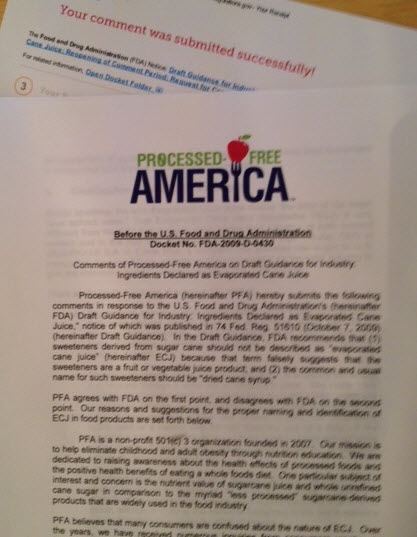 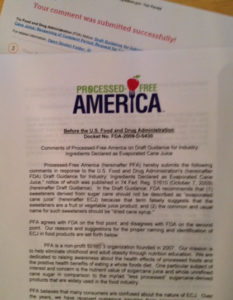 Today, Processed-Free America submitted a formal comment to the FDA in favor of banning the use of the term “evaporated cane juice’ on food ingredient lists.  We are hoping that you will post a comment too, and we’re making it easy for you to do so.  The details for posting your own comment are below, but first, here’s the scoop on why this is important.

In 2009 the FDA created a Draft Guidance for Industry, basically telling food manufacturers and sugar producers that processed crystallized sugar products should not be declared as “evaporated cane juice” because that term falsely suggests that the sweeteners are liquid juice.

In 2014, the FDA is cracking down on food manufacturers because they are marketing their products as being healthier than they really are.   This has become such a serious issue that law suits are cropping up all over the country to end this misleading labeling and preying on the average consumer’s lack of sugar processing knowledge.  The plaintiffs argue that “evaporated cane juice’ is just plain old sugar, and should be described as such. (Read about the lawsuits here.)

I wrote an article titled The Skinny on Evaporated Cane Juice  to help educate consumers about what exactly “evaporated cane juice’ is.  The article clearly explains that “evaporated cane juice” is a wrongly used term by the industry to appeal to health-conscious consumers.  This article has been seen over 129,000 times.

For once, I sort of agree with the FDA. I believe that the use of the term is misleading.  Many people think it’s a healthy sugar, when in fact it’s a far cry from healthy.  Even the representatives of Wholesome Sweeteners, a leading importer and distributor of “evaporated cane juice” in the U.S., admit that “the sugar is processed in a similar manner as refined white sugar, minus the chemical decolorization and final refining process. “Evaporated cane sugar” is processed in such a way to retain a miniscule amount of molasses, resulting in a clear crystal with a light tan color.”  It resembles white sugar in both appearance and sweetness level, and was distinctly developed to give food manufacturers an alternative to the traditional darker sugars that don’t work so well in “natural” cookies, breakfast cereals, ice cream, ketchup, and many other food products.  In fact, according to Wholesome, it has been accurately estimated that over 9,000 current products list evaporated cane juice as an ingredient on the label.

I wrote a detailed comment to the FDA, letting them know that Processed-Free America and its followers believe that the term “evaporated cane juice” is misleading and should be renamed to reflect its true nature.

You can write your own comment, or you can copy and paste the following suggested comment to the page:

I believe that Evaporated Cane Juice is a deceiving term for consumers.  It does not accurately reflect the nature of this new type of sugar, and leads consumers to believe that it is a healthy, natural alternative sweetener.  In actuality, this sweetener is processed in a similar manner as refined white sugar, minus the chemical decolorization and final refining steps, yielding a sugar that contains only a miniscule amount of nutrients. It is just as damaging to the human body as refined white sugar, and needs a new name that allows consumers to identify it accurately.

I therefore respectfully ask that the recent FDA guidance Docket#FDA-2009-D-0430 be revised, and there should be a follow-up comment period for industry and consumers to suggest a new name that reflects the true nature of this new type of sugar. 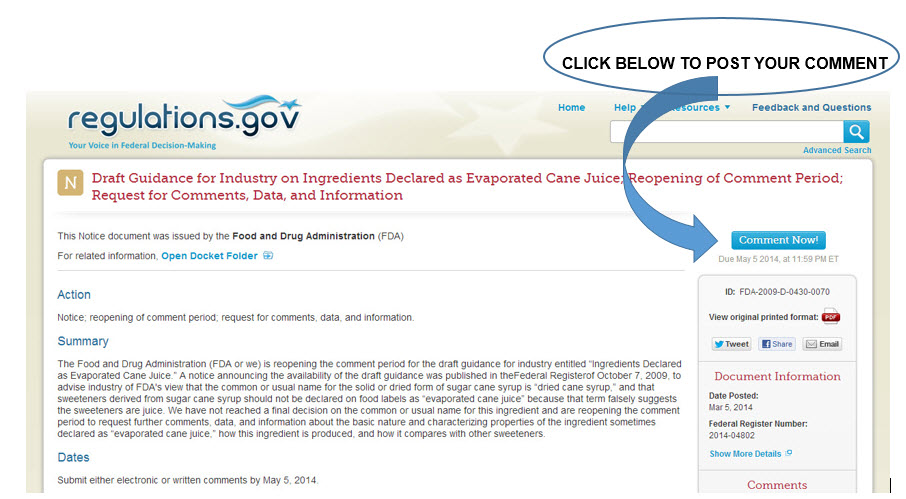 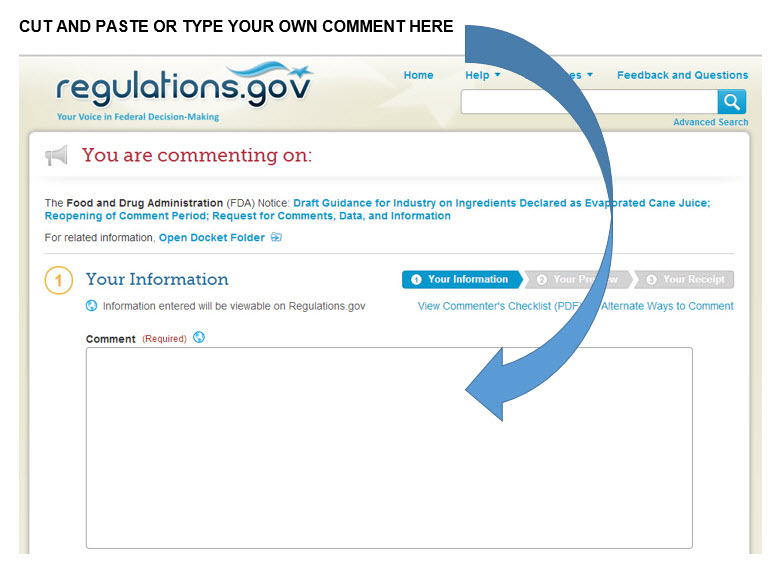 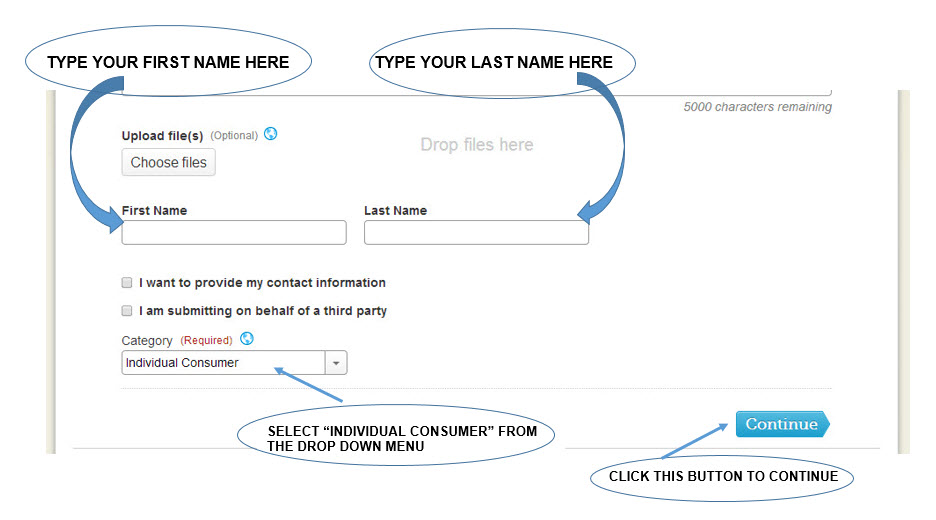 3.  Fill in all the boxes as indicated in the picture.  When you click the blue “Continue” button, it will take you a Preview screen where you can double check that everything is accurate.  Then click submit.  You’re all done!

THANK YOU very much for supporting this effort.  We rely on on our followers to carry out our great work!