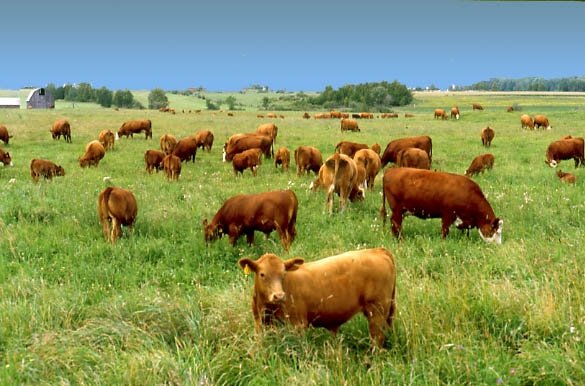 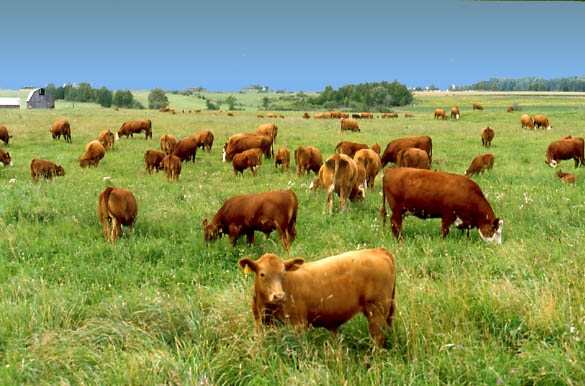 Traditionally, all beef was grass-fed beef. But today the meat we buy in the supermarkets is far different. It is mostly corn-fed beef that is then sent to a feedlot before being slaughtered. Before World War II, beef cattle were raised on grass. It could take four years to fatten a steer. But then the industry switched to corn, a sort of time machine for a steer. Today calves start out on milk and grass but then, after about six months when they reach a weight of about 650 pounds, they’re sent to a feedlot. At the feedlot they are fed sugar beet waste, hay, sorghum, corn, molasses, cottonseed meal, soybean meal and oats to fatten them up before they are slaughtered. By the time they are only 14 or 16 months old, they are fat enough for slaughter. To get them fat that fast, it takes enormous quantities of corn, protein supplements, antibiotics and other drugs, including growth hormones. And of course this transfers to the food we eat as beef. 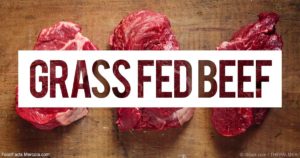 Feeding cows this diet is what makes the fat or marbling in beef, rather than fat that can be trimmed off the sides. This diet fed to cattle for the 4 months before going to the slaughterhouse isn’t very good for humans to eat. What this does to the beef is lower its omega-3 fatty acids and significantly raise the omega-6 fatty acids. And Americans get far too much omega-6 in their diets and too little of the omega-3. This also raises the saturated fat level in this beef as well, which results in an imbalance in the natural ratio of saturated fat to other fats in the beef.

Cattle that eat a grass-fed diet have a healthier profile than grain-fed beef does. They have a higher omega-3 level and a lower omega-6 level, making it much healthier for us to eat. Omega fat levels are important in our health, and eating more omega-3 than omega-6 is important. The grass-fed cattle are also much higher in vitamin E, vitamin C, beta-carotene and conjugated linoleic acid (CLA). CLA is proving to be an aggressive cancer fighter.

You should be aware that there are differences in how beef is labeled. Some can say grass-fed beef, but it doesn’t tell you for how long the cattle was fed grass. Sometimes, the cattle are fed grass until it comes time to what is called “finishing,” and at that time the cattle could be fed other foods. For totally grass-fed beef, look for a label that says 100% grass-fed.

Also, just because a package says grass-fed beef, doesn’t mean it’s organic since the grass could have been treated with fertilizers, herbicides and pesticides. Grass-fed doesn’t have to mean organic. The best beef to eat is organic grass-fed beef.