As a former sufferer of binge eating disorder (BED), I wish I had known about gymnema sylvestre. This herb, popularly known as gurmar or “destroyer of sugar,” has long been used in India and Ayurvedic medicine for its ability to temporarily suppress the taste of sweet (Tiwari, Mishra & Sangwan, 2014). While recovery from BED requires a multi-faceted approach, a powerful herb that can quell the desire for sugary binge foods may be an effective intervention when cravings come on strong during the treatment period.

What is Binge Eating Disorder?

According to the National Eating Disorder Association, BED is the most common eating disorder in the United States, affecting about 2 to 4 percent of adults at some point during their lifetimes (Binge Eating Disorder, 2018). It is characterized by frequent recurrent episodes of eating large quantities of food in a short period of time, without attempts to compensate for the excess calories (such as self-induced vomiting, use of laxatives or excessive exercise) (Dingemans, Bruna & Van Furth, 2002). As a result, many people with BED are overweight or obese, putting them at higher risk for heart disease, diabetes and hypertension (Health Risks, 2015).

Binges typically occur within a 2-hour timeframe, and often lead to the point of feeling uncomfortably full. BED sufferers describe it as an unpredictable cycle vacillating between periods of controlled eating followed by periods of binging on foods that are high in sugar and refined carbohydrates, fat, salt or a combination of these. During the binge episode they experience a loss of control; after the binge they feel intense shame, guilt, remorse, self-hatred and inadequacy (Dingemans, Bruna & Van Furth, 2002).

Causes, Treatments and the Action of Gymnema Sylvestre

Causes of BED include a combination of genetic, developmental, social, cultural, nutritional and psychological factors. Past emotional or physical trauma is a common theme among those with BED (Bulik, Sullivan & Kendler, 2003). Therefore, the most successful treatments involve nutritional interventions in conjunction with psychotherapy, emotional support and cognitive behavioral therapy (Mahan & Raymond, 2017).

Gymnema sylvestre can be of use during BED treatment in two ways: (1) its leaves contain a variety of compounds that temporarily impair the tongue’s ability to taste sweetness and (2) those compounds also impair the absorption of glucose from the small intestine into the bloodstream. Thus, gymnema sylvestre can curb the desire to binge on sugary foods and aids in stabilizing blood sugar levels which results in fewer cravings overall.  As a bonus, research is showing it has promise in treating diabetes and obesity (Kanetkar, Singhal & Kamat, 2007).

The compounds in gymnema sylvestre that blunt the taste of sweet are called gymnemic acids and gurmarin.The molecular structure of gymnemic acids are very similar to sugar molecules, so they fit perfectly into the sweet receptors on the tongue, blocking sugar molecules from doing so. The effect is that the tongue won’t be able to taste anything sweet, making sugary foods a lot less desirable. Gurmarin molecules act in a similar fashion by interfering with the ability of taste buds on the tongue to differentiate between sweet and bitter, making sugary foods taste somewhat bitter and even more undesirable (Tiwari, Mishra & Sangwan, 2014).

Gymnemic acid molecules also fit perfectly into the glucose receptors in the lining of the small intestine, thereby preventing the absorption of glucose molecules into the bloodstream, leading to a reduction in blood sugar levels (Tiwari, Mishra & Sangwan, 2014).

Preparations and Effectiveness of the “Sugar Destroyer” 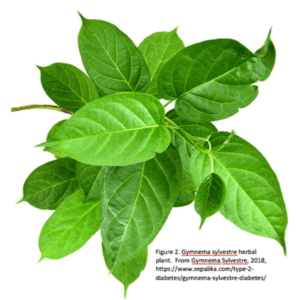 Gymnema sylvestre is fairly inexpensive and can be purchased as loose tea leaves, liquid tincture, and as an active ingredient in tablets and lozenges. Most studies showing its effectiveness have been conducted by pouring one quart of boiling hot water over 1/4 cup of dried leaves covered and steeped for 10 minutes, then strained. The tea can be served hot or iced. The effect of the tea is reversible and persists for approximately 30 to 60 minutes. Rinsing the mouth with water does not substantially alter or dilute its effects (Schroeder & Flannery-Schroeder, 2005).

A gymnema extract tablet that dissolves on the tongue was clinically shown to produce an anti-sweet effect for a duration of 30 minutes (Devi & Jain, 2015).

Crave CrushTM, a lozenge which contains 2 milligrams of gymnemic acid extract, has been clinically shown to significantly reduce the desire for and consumption of high sugar foods compared to a placebo (Nobel, Baker & Loullis, 2017).

Gymnema Sylvestre Interactions and Side Effects

Gymnema sylvestre is relatively safe with no reported side effects, however taking the tea on an empty stomach is not advised as it may cause mild stomach upset.

Its use should be monitored when taken with aspirin, insulin or other blood sugar lowering medications, as the cumulative effect may lead to a severe drop in blood sugar levels resulting in hypoglycemia.

Pregnant and breastfeeding women should not take gymnema sylvestre. Those planning to undergo surgery should stop taking gymnema sylvestre, since it can lead to hypoglycemia and resulting complications during or after surgery (Gymnema, n.d.)

Is Gymnema Right for You?

Without the distraction of an insatiable desire for sweets, those with BED may have an easier time focusing on the emotional and mental aspects of their recovery. When used as part of an integrative treatment plan, the science is showing the usefulness of gymnema sylvestre. An eating disorder professional can help determine if it’s right for you.

Dee did a podcast on this topic on Diet Science. Here’s the link to that podcast. Below are recommendations from Dee mentioned in this podcast:

Health Risks of Being Overweight. (2015, February 01). Retrieved from https://www.niddk.nih.gov/health-information/weight-management/health-risks-overweight

Schroeder, J. A., & Flannery-Schroeder, E. (2005). Use of the herb gymnema sylvestre to illustrate the principles of gustatory sensation: An undergraduate neuroscience laboratory exercise. Journal of Undergraduate Neuroscience Education, 3(2), A59–A62.