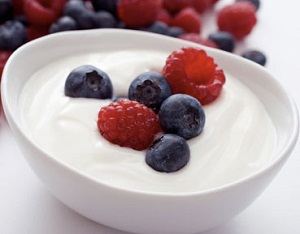 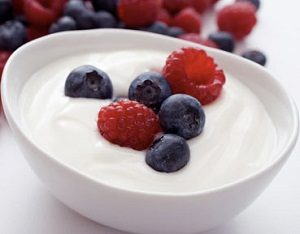 The evidence in favor of the benefits of full fat dairy continues to mount.  Several studies published earlier this year conclude that consumption of whole-milk dairy, if dairy is your thing, is linked to reduced body weight.

A large-scale study conducted at the University of Navarra in Spain, and presented at the European Congress on Obesity in Sofia, Bulgaria, found that men and women who ate at least one small 125 gram serving (slightly more than a half cup) of full fat yogurt each day were less likely to pile on the pounds than others.

The study tracked the weight of more than 8,500 Spanish men and women for almost seven years. None were overweight at the start of the study.  By the end of the study, more than a fifth had gained so much weight that they were classified as obese.

Analysis of their eating habits over the seven years showed that people who ate a serving of full fat yogurt a day were 19 percent less likely to be obese compared to those who ate less than two servings a week.  Despite its perceived reputation for being healthier, low-fat and non-fat yogurt did not have the same slimming benefit. 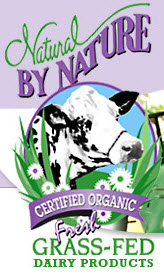 This new research on the slimming benefits of yogurt adds to other recent research showing the benefits of full fat dairy—a food that has been wrongly shunned for nearly fifty years.  For many decades there has been a hypothesis that high-fat dairy foods contribute to obesity and heart disease risk, but new research is showing that the evidence does not support this hypothesis.

A Swedish study published in 2013 in the “Scandinavian Journal of Primary Health Care” studied the association between dairy-fat intake and central obesity, otherwise known as belly fat.  Middle aged men who consumed full fat milk, butter, and cream were significantly less likley to beome obese over a period of 12 years compared with men who never or rarely ate full fat dairy.  The conclusion of the study was that a high intake of dairy fat was related to a reduced risk of central obesity, whereas a low dairy-fat intake was correlated with an increased risk of central obesity. Based on the results of this study, the fat in dairy seems to be a crucial component involved in promoting weight loss.

A separate and more recent meta-analysis of 16 relevant studies in the European Journal of Nutrition echoes the link between full fat dairy consumption and lowered risk for obesity.  The association between higher dairy fat and lower body weight appears to hold up in children, too. A study of preschool-aged children published in the Archives of Disease in Childhood, a sister publication of the British Medical Journal, found that kids who drink low fat milk were more overweight than those who consumed whole milk.

Researchers are not yet clear on what might explain this phenomenon. Many point to the satiety factor. The more fat in the milk, the faster we feel full, so we may end up eating less.

But some believe the explanation is more complex. There may be bioactive substances in the milk fat that alter our metabolism in a way that helps us utilize the fat and burn it for energy, rather than storing it in our bodies.  We do know that when fat is removed from milk, the naturally occurring milk sugar, lactose, is quickly absorbed into the bloodstream, which causes a blood sugar spike that leads to overproduction of insulin—a hormone that signals the body to store fat.  Full fat dairy does the opposite, it slows down the absorption of lactose and prevents blood sugar spikes. 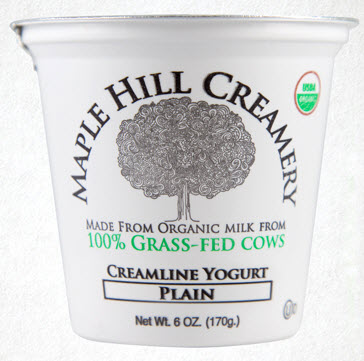 Milk fat also contains a unique mix of healthy fats not found in any other foods.  You may have heard of two of these healthy fats: conjugated linoleic acid (CLA) and omega-3 fatty acids–both known to aid in weight loss by burning more body fat–but there are other fats in milk that you probably have never heard of, such as vaccenic acid, rumenic acid and trans-palmitoleic acid. Researchers have found that people with the highest levels of trans-palmitoleic acid (a “good fat” in whole milk) in their bodies have lower rates of obesity and diabetes, and that drinking whole milk increases the levels of this unique fat in our bodies.  This could be a possible reason why the European Journal of Nutrition study mentioned earlier found that there isn’t enough evidence to support the theory that dairy fat increases our risks for obesity, diabetes, or heart disease.

So, whatever it is, something in the full-fat dairy is working much better than low- or no-fat dairy– and that’s what we should be paying attention to. I’m not saying that dairy is essential for health, because it’s not, but if dairy is your thing, then full fat dairy is a better choice.  And on that note, the healthiest milk and dairy products come from cows that graze on organically grown grass (as opposed to organically grown grains), and ideally should be raw if you can get it.