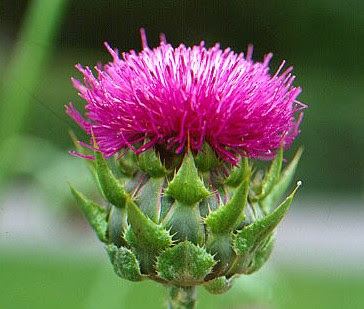 by Dee McCaffrey
No comment(s) 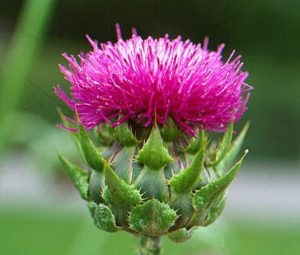 In addition to being the body’s main detoxifying organ, the liver is also the body’s main fat-bruning organ.  When the liver becomes sluggish from accumulation of toxins from foods, beverages, medications, skin care products, hair products, and environmental pollution, it becomes less efficient in its fat burning role and begins to store fat instead.  Milk Thistle is an herb that can help cleanse and support the liver to restore its ability to burn fat efficiently.

Milk thistle is native to regions of the Mediterranean and has been used for over 2,000 years for its liver healing properties. More than 300 studies have now shown that its active ingredient, silymarin, can protect liver cells from the poisonous effects of alcohol and other toxic chemicals. It inhibits free radical formation and boosts glutathione levels in the liver by over 33 percent.

The active ingredient in milk thistle is an antioxidant flavonoid compound called Silymarin, which  has three components: silybin, silychristin and silydianin.  Several studies have proven that milk thistle can actually regenerate liver cells that have been damaged by cirrhosis and infectious hepatitis. It is incredibly antifungal and has been used as an antidote to poisoning by the deathcap mushroom. It is even being studied as a way to slow the growth of prostate cancer.

Milk thistle has been shown to protect liver cells in the following ways:

Other purported uses for milk thistle include the treatment of heartburn, loss of appetite, symptoms of gallbladder disorders, diabetes, increasing breast milk flow, inducing menstrual flow and even hangovers.

Researchers have found that Milk thistle is not well absorbed into the body as a brewed tea because the silymarin is not water soluble. It must be extracted using alcohol, therefore it is best consumed in extract form, either as a dried powder in capsules or in tincture form. Adding the tincture to a cup of warm water makes a more effective tea.

The suggested dose of milk thistle from the Physicians Desk Reference is generally 200 to 400 mg of silymarin per day.
Side Effects

Very few side effects if any have been associated with milk thistle. Milk thistle is considered safe when you follow the recommended dosage.  If you are pregnant, consult with your doctor before taking milk thistle.

Dee McCaffrey is an organic chemist turned nutritionist and weight loss expert. She is an internationally acclaimed author who lost 100 pounds and has kept the weight off for over two decades. Dee frequently conducts nutrition lectures and cooking classes at venues throughout the United States. She has appeared on numerous TV and radio shows throughout the U.S. including National Public Radio (WNPR), The Doctors, Better TV, The List, and The Dr. Steve Show. Dee and her husband Michael McCaffrey are the founders of Processed-Free America, a non-profit organization dedicated to bringing a global awareness of the effect processed foods have on our health, and the healing properties of natural whole foods. In addition to her published books, Dee has developed an award-winning nutrition curriculum for children, and a certification program for adults to who want to teach the Processed-Free lifestyle to people in their communities. Dee is an adjunct faculty member in the nutrition department at The Southwest Institute of Healing Arts in Tempe, Arizona, and a professional member of the National Association of Nutrition Professionals and the American Association of Nutritional Consultants. She lives in Tempe, Arizona with her husband and two cats.